Last Sunday I packed up all my running gear for another long and steep trail run. Nate recently acquired an old van from the 90s that would be our ride to Big Sur. Old vehicles kinda put me on edge but this one felt oddly familiar because growing up at Lake of the Ozarks we had a van like this so all kinds of memories were lighting up.

The drive to Big Sur can be a little boring until you get closer to Monterey where the coast begins to interrupt conversations. We stopped in Carmel for coffee and a walk on the white sands. A sociable red lab was grabbing the attention of every person and dog walking by, cementing my love for red labradors.

We continued down Highway 1 to Big Sur for some lunch at a bakery. Ordering expensive avocado toast in Northern California might be the most cliché thing you can do, but it’s so good!

We made our way to a campground just before sunset and walked around looking for sea otters and whales. We saw two spouts far north of us, an occasional tail, more spouts – my second time seeing whales in California. A little trail guided us down to the shore with an arched rock framing the sunset.

Nate cooked dinner from the back of the van before we got some rest. We were about three days from a New Moon and the Milky Way was smeared across the sky. I hadn’t seen stars like that in years.

Monday morning came fast, Nate made a caffeine concoction of instant coffee, black tea and chai to get us moving. We didn’t waste much time moving the van to the trailhead. I love just getting up and going in the morning, leaving no room for hesitation. 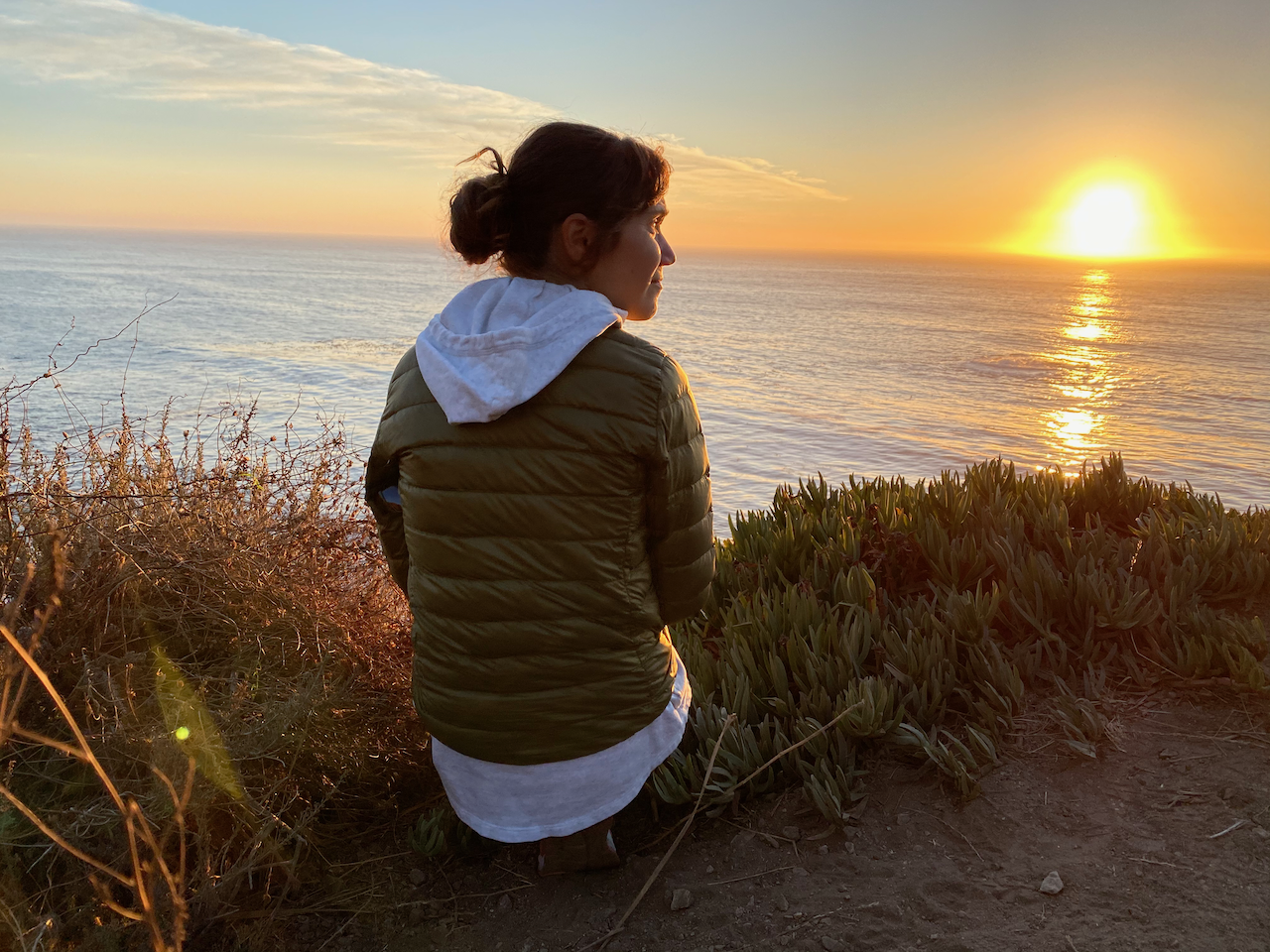 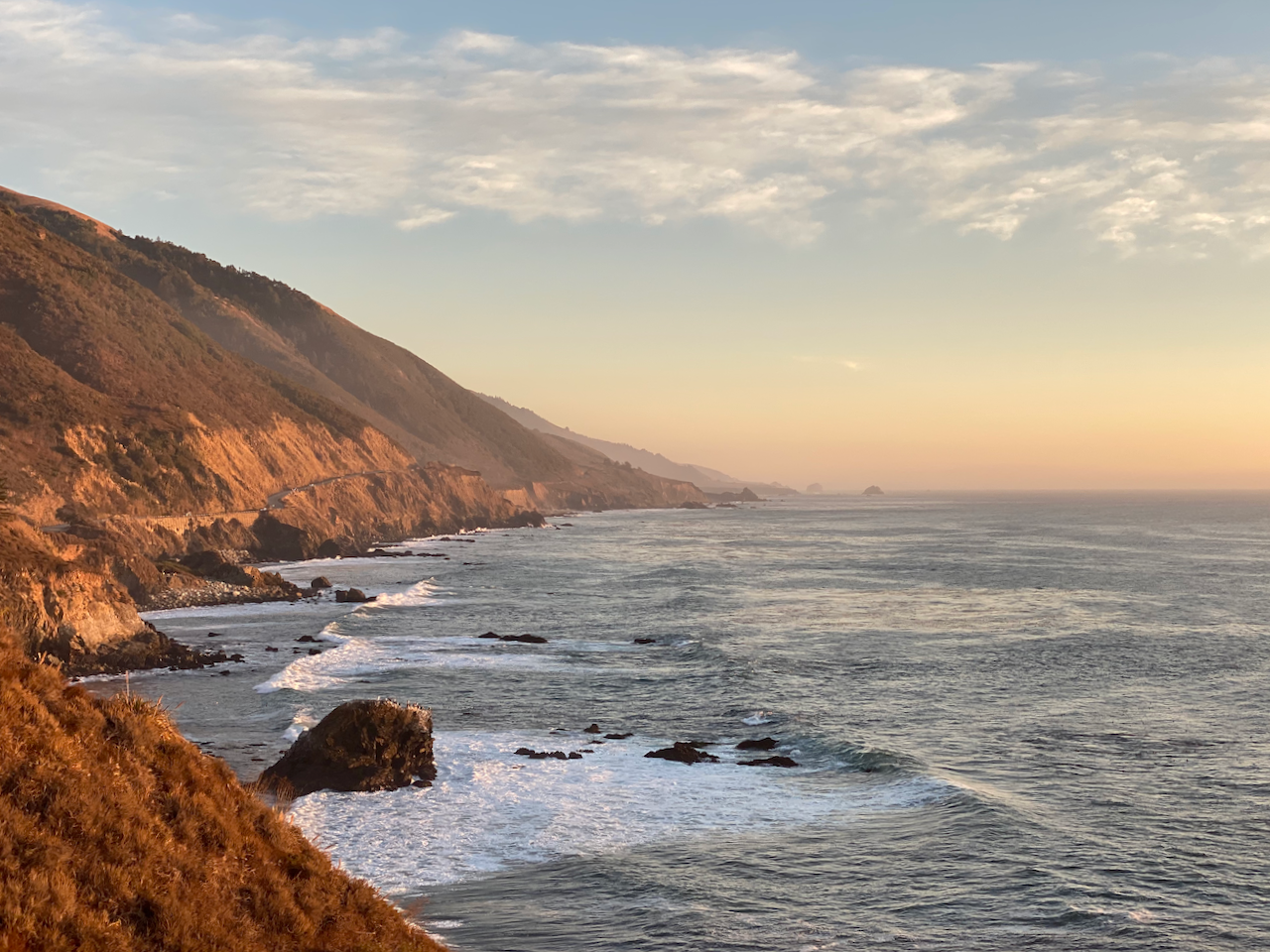 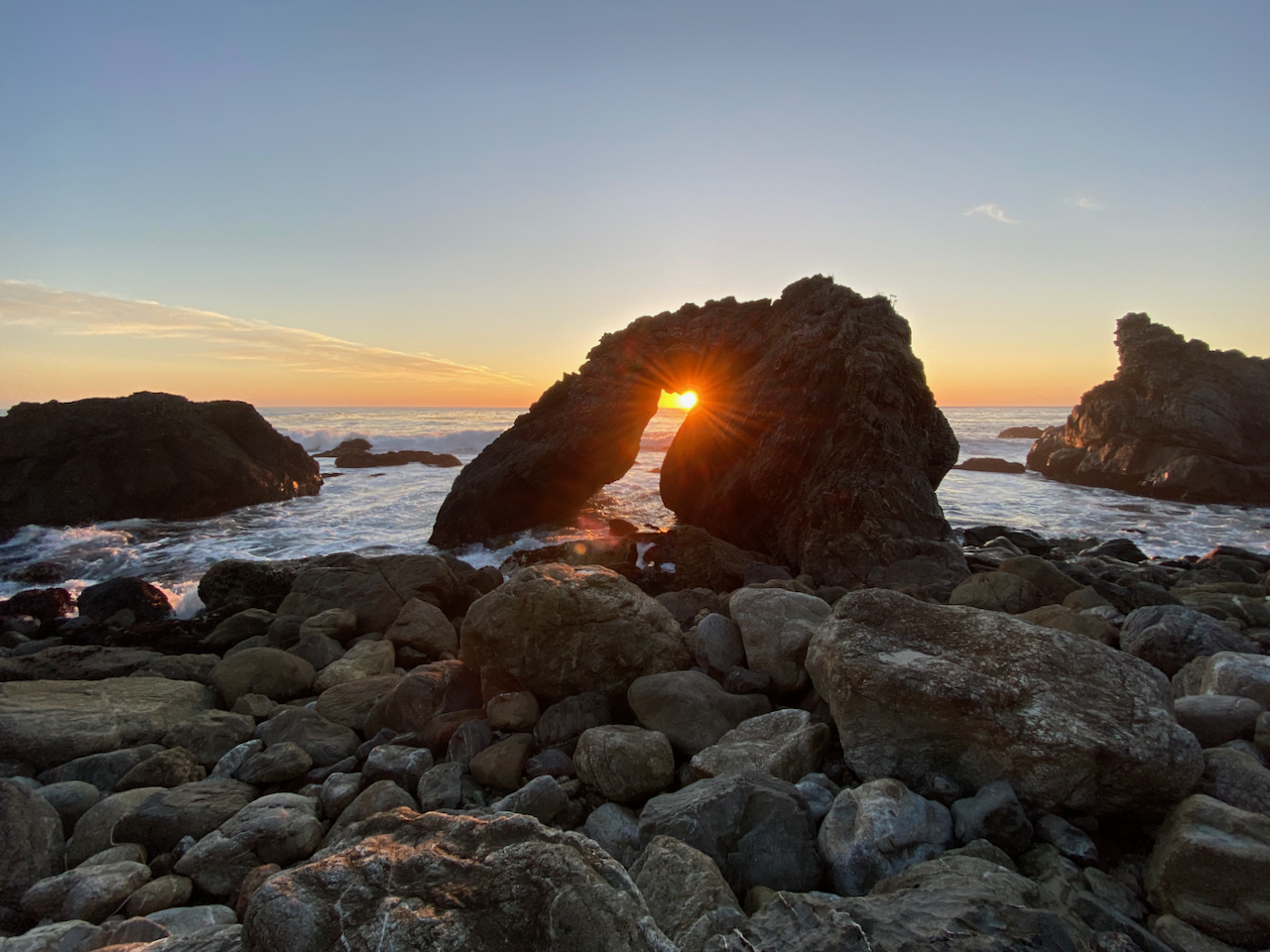 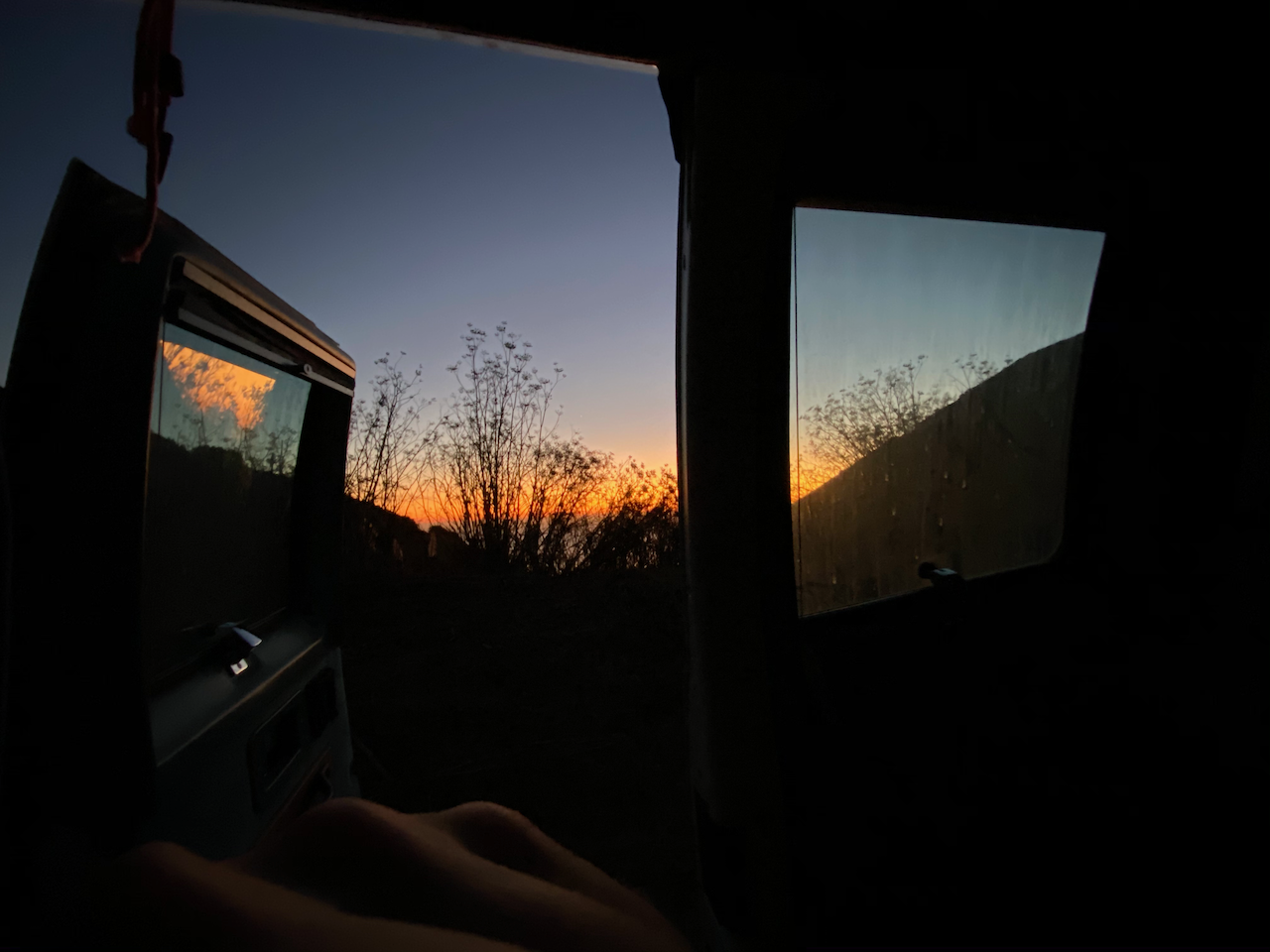 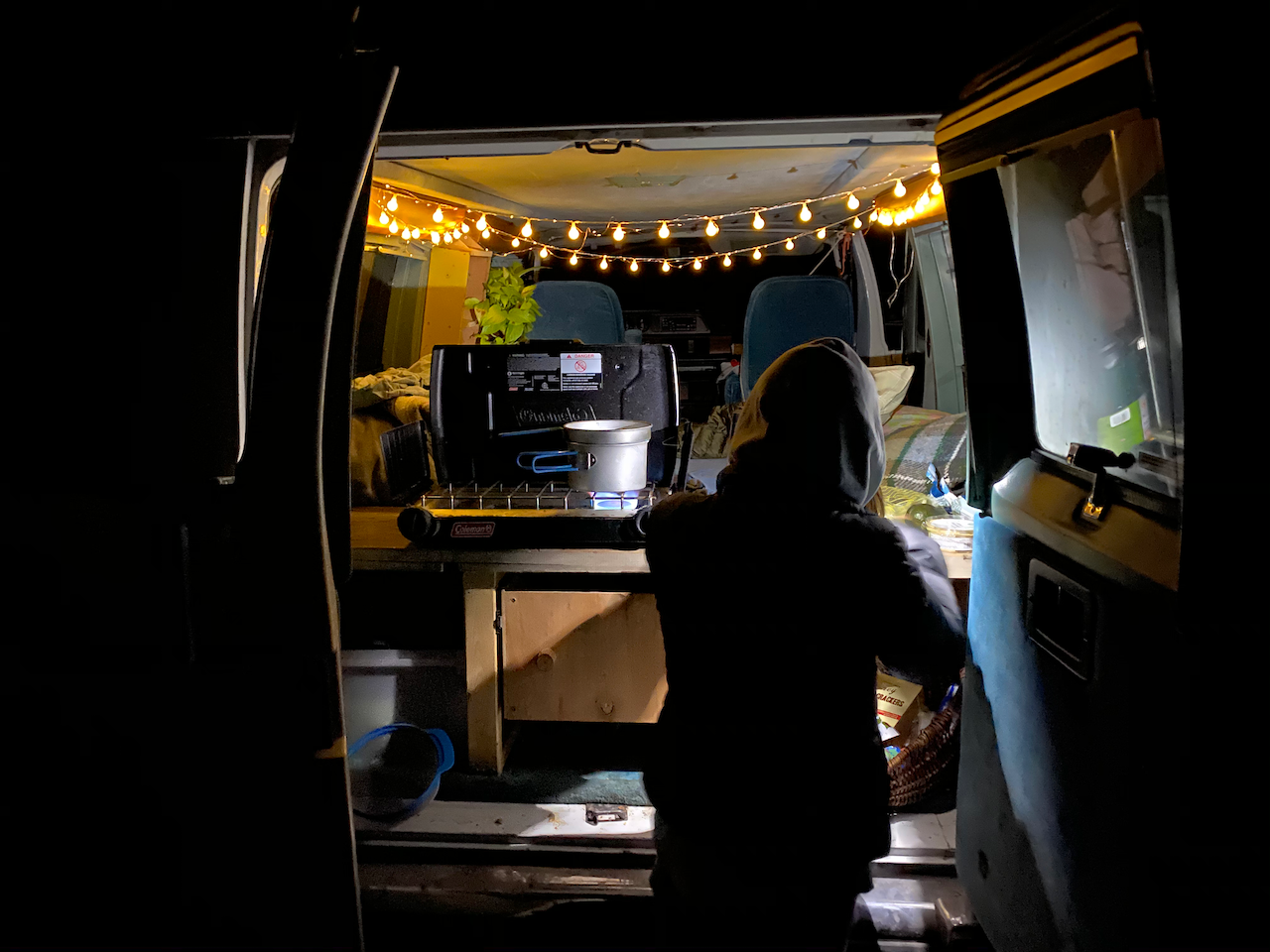 Vincente Flat Trail was a constant but not exhausting climb. I have a tendency to focus too much on the immediate path ahead so each time I looked up the increasingly vast coastal scenery would be overwhelming. The temptation to pull out my camera was hard to resist.

Aside from the scenery some of my favorite moments were descending into the valleys with streams and the smell of damp forrest. There were a few campers that morning so with quiet feet we moved through campsites and greeted sleepy eyes. One valley felt like an obstacle course with fallen trees and hard to see paths, luckily Nate was familiar with the area and guided us through with ease. 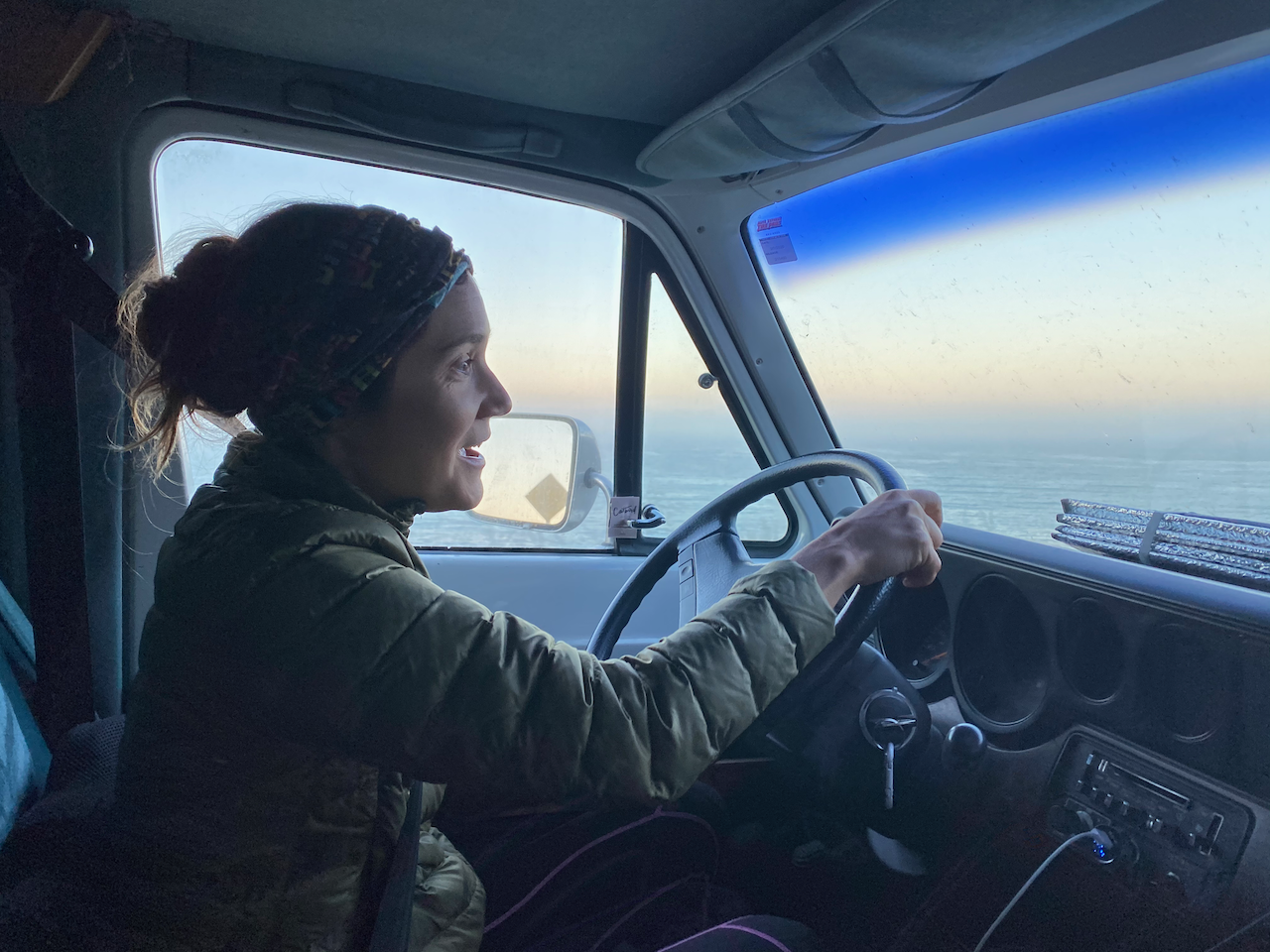 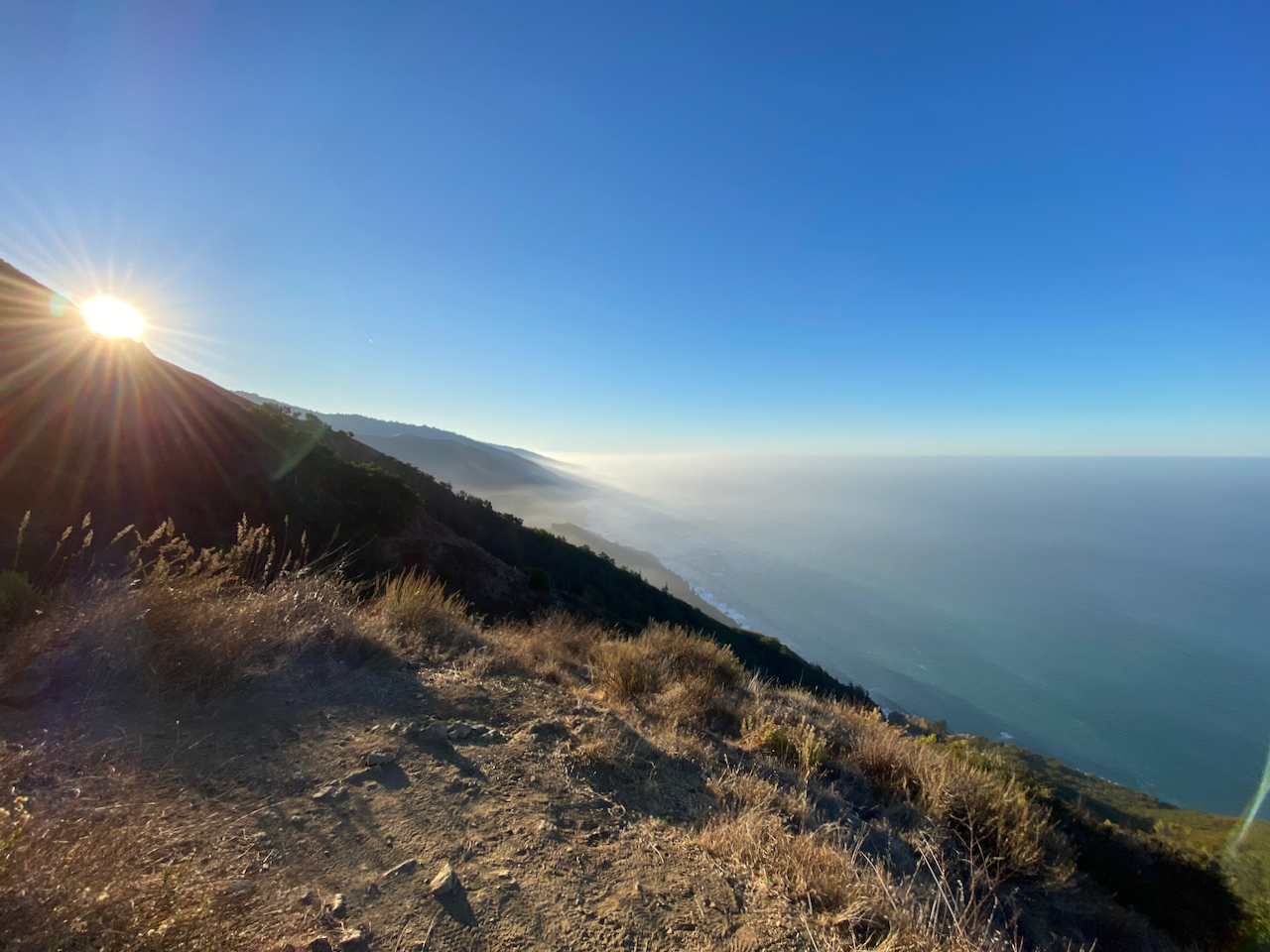 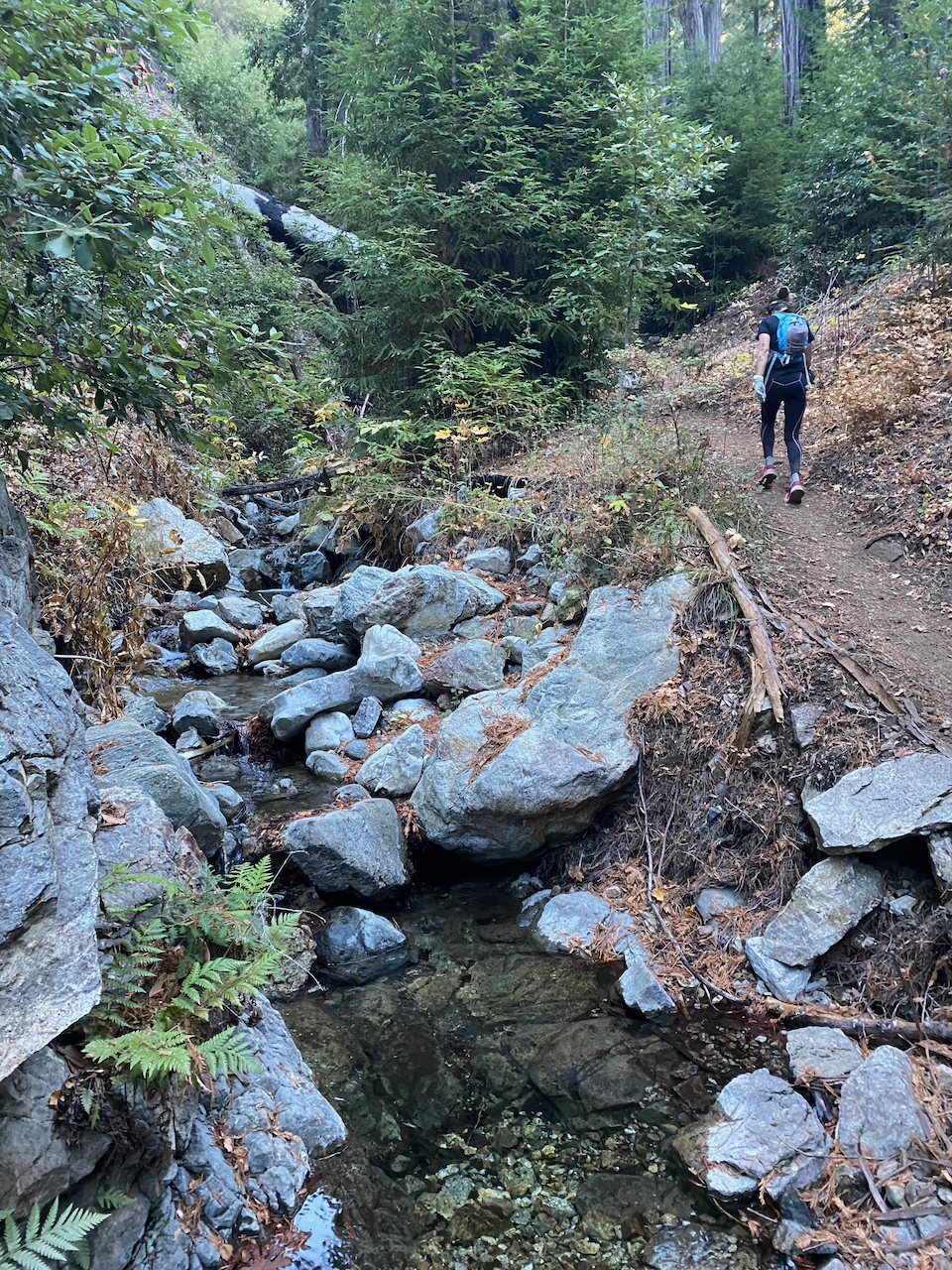 I’m still pretty new to long distance and trail running so it was nice to have her keeping conversation pace and giving me subtle cues to eat when she ate. Runs like this are a great way to get to know someone.

We reached the summit after passing a couple volunteer park rangers. The wind was fierce so we didn’t waste much time. After some chit-chat with the volunteers we made our descent. Most of it felt like a controlled fall, Nate bombs down hills and I could tell she was enjoying this part. My quads were on fire but determined to keep up. 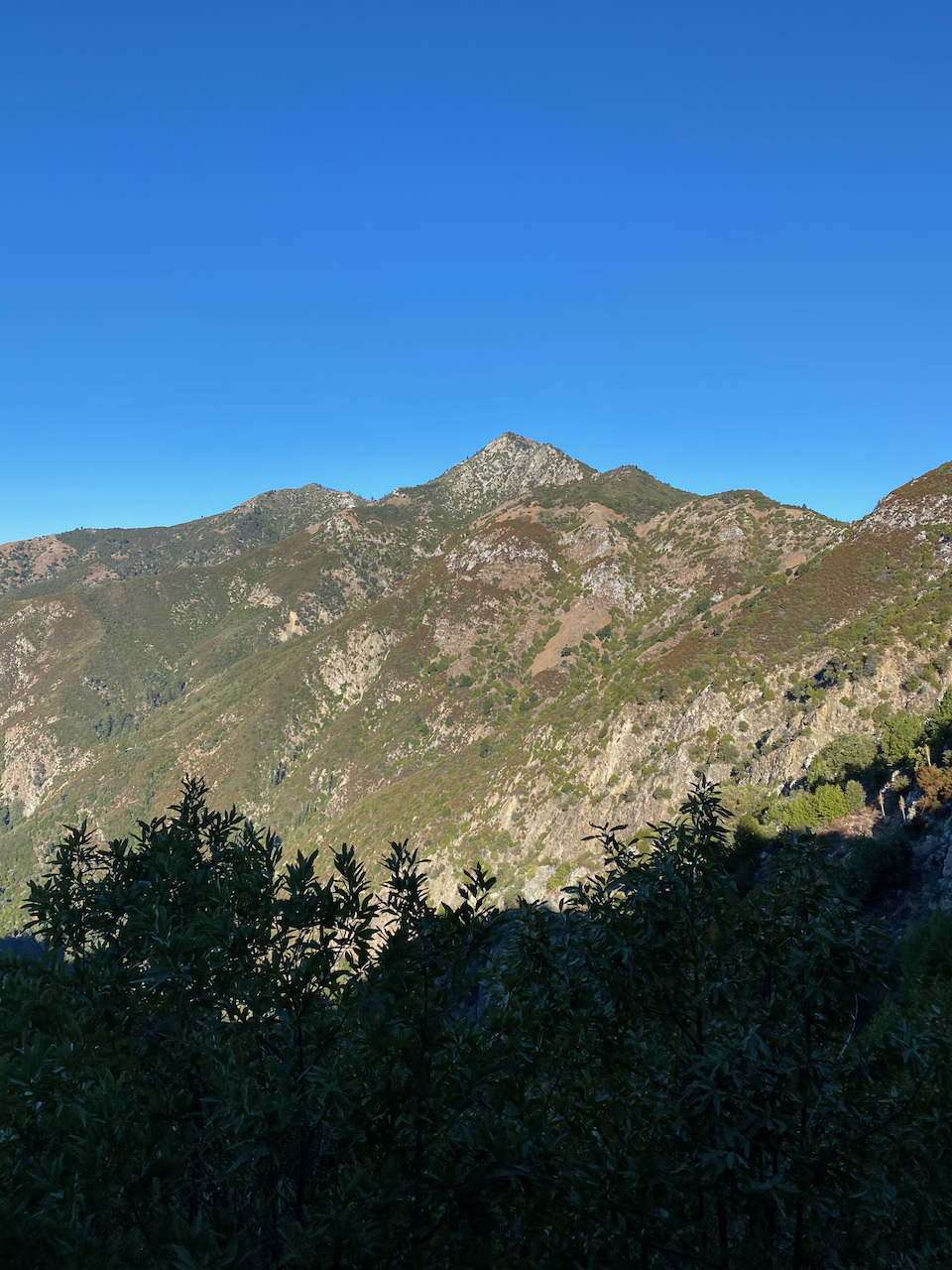 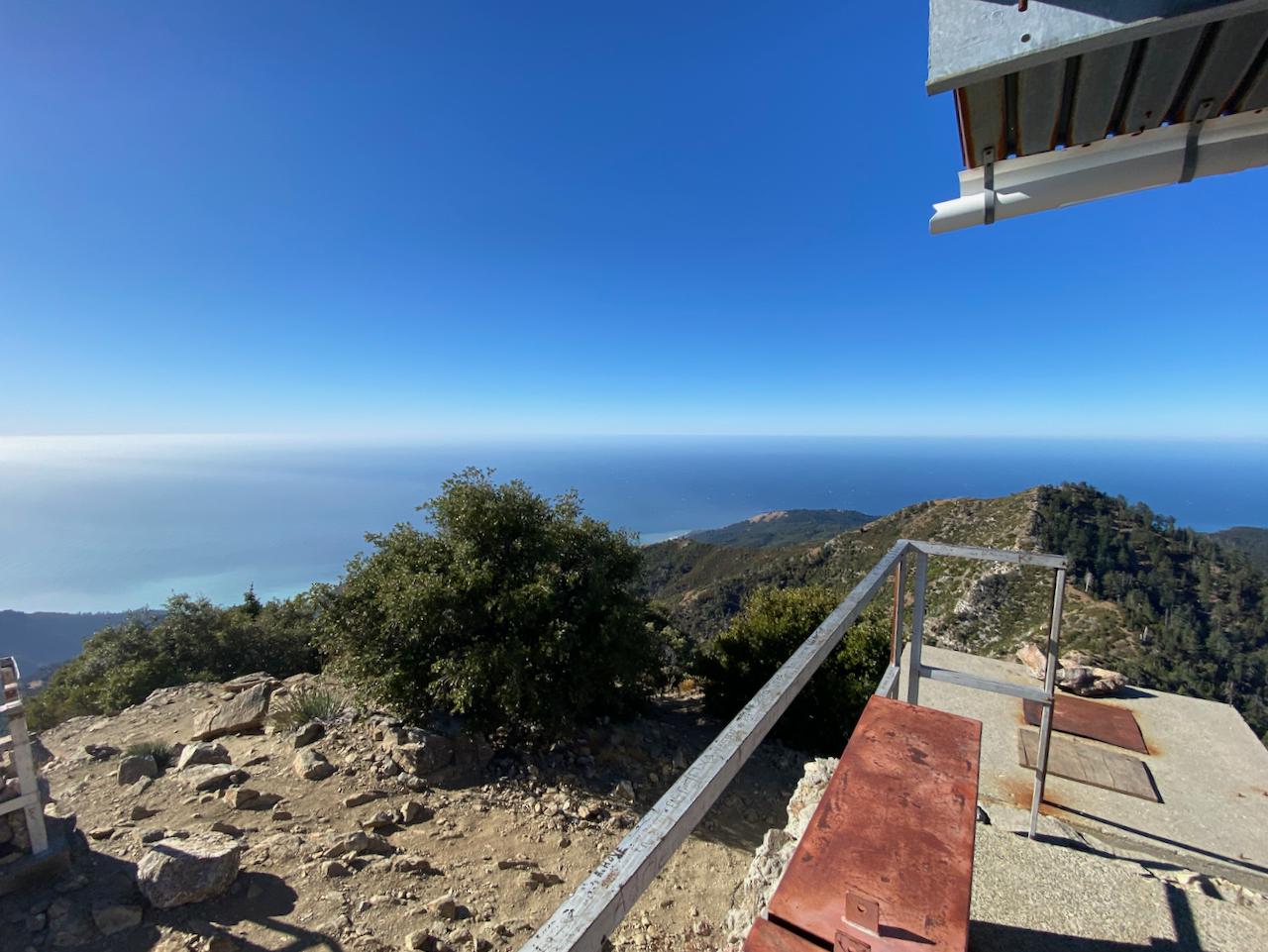 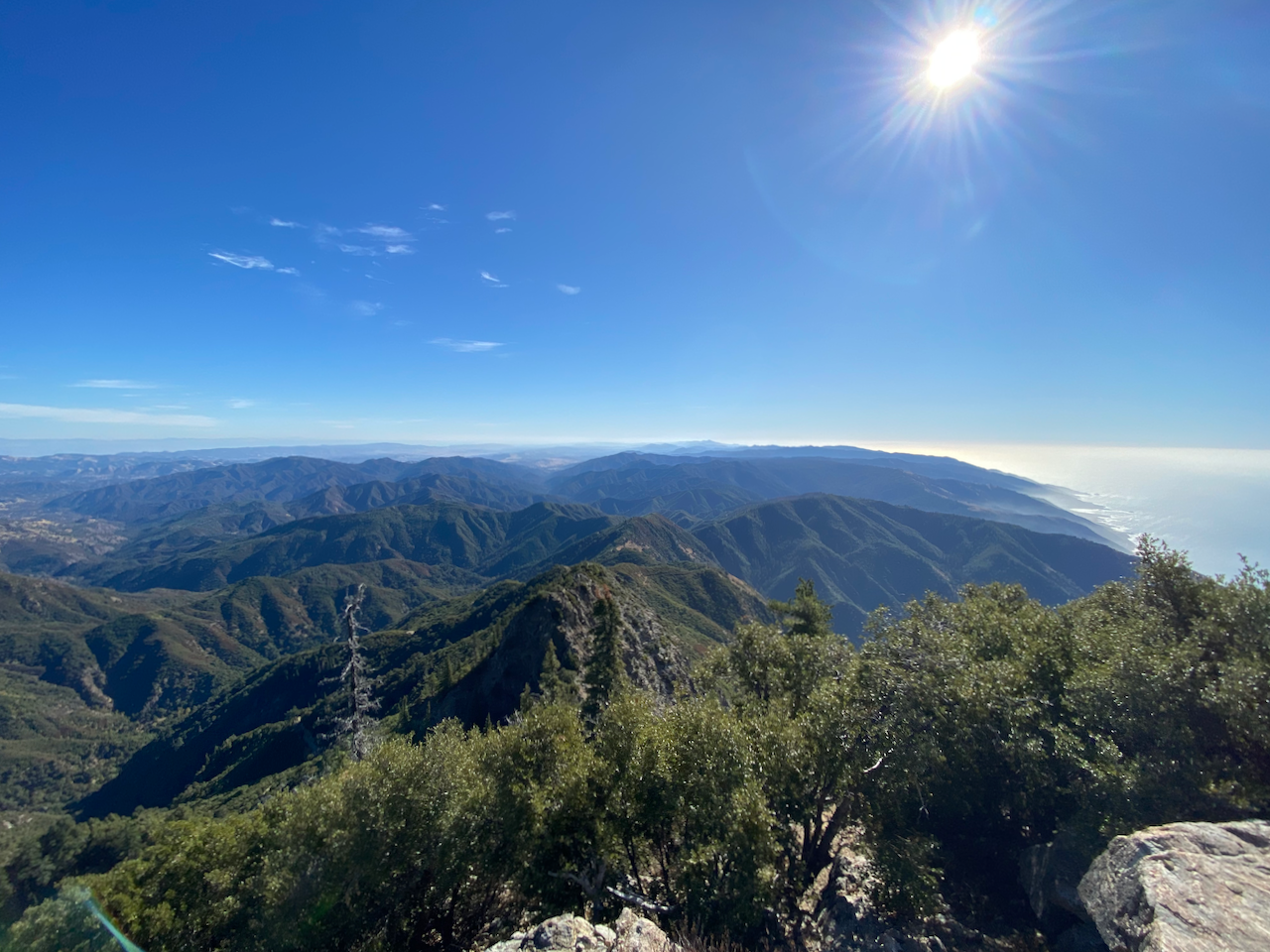 At around mile 15 I was beginning to feel pretty exhausted. It was becoming clear I had not eaten enough on the way up. Around Mile 17 I ran out of water and hesitated to fill up at a stream. Lesson learned: when faced with stream water vs no water, always chose stream water. I honestly don’t even remember the final mile because my body just took over and did everything it could to finish. Once we reached the van I totally spaced out chugging water in the front seat. Nate handed me a tangerine that lit up my tastebuds and snapped me back into existence.

We ran 21 miles up 6,782 feet over the course of about five and a half hours. This was my longest and highest run to date. Pretty sure I rode an endorphin high for the next three days!